The trailer for Zero Chill has arrived and features costume design by Natalie Willis.

Zero Chill is a teen sports-drama set in the UK. It’s about talented figure skater, Kayla, who is forced to leave everything behind in Canada when her family follows her twin brother, Mac, to a prestigious hockey academy in the UK.

The Netflix Original show is created by Kirstie Falkous and John Reiger. The series is produced by Lime Pictures, the studio behind Netflix’s Free Reign and Disney’s The Evermoor Chronicles. It stars Grace Beedie as Kayla and Dakota Taylor as Mac.

Check out Natalie Willis’ costumes this spring when the entire first season arrives on Netflix! Catch all 10 episodes on March 15th. 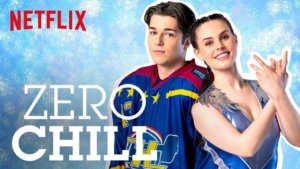 Natalie Willis is a talented Costume Designer with over a decade of experience in the industry. Natalie has a vast portfolio with great projects under her belt some of which include, Netflix’s Zero Chill directed by Angelo Abela, W1A (S2 & S3) directed by John Morton, The Real Charlie Chaplin directed by Peter Middleton & James Spinney and Rudeboy: The Story of Trojan Records directed by Nicolas Jack Davies. This year Natalie designed Strike: Troubled Blood for BBC1 and HBO Max based on the best selling novel and is currently designing the new Netflix drama Palomino directed by Iram Haq in Spain.