The National Theatre have aired their production of Romeo & Juliet with Cinematography by Tim Sidell and directed by Simon Godwin. Shot in 17 days under lockdown in December 2020 at the National Theatre’s Lyttleton stage, Josh O’Connor and Jessie Buckley star.

The following is a collection of reviews about the new dazzling adaptation.

Hollywood Reporter: “Tim Sidell’s camerawork, too, is remarkable at evoking both the simmering hostility of Verona’s feuding families and the raw emotion of their forbidden lovers. Unconventionally angled close-ups bring dangerous intimacy and tactile sensuality to their physical union, and composer Michael Bruce’s surging strings turn up the heat between them. The lustrous visuals and enveloping atmosphere would be even more impressive on a big screen.”

The Evening Standard: “The National Theatre has created a thing of beauty with this star-studded mix between a play and a film.”

The Guardian: “National Theatre’s first film is an ingenious triumph” and also “Poised and adventurous, this Romeo & Juliet is a hybrid wonder and full of intelligent invention.” / “Tim Sidell’s photography appears like a moving painting at times and Michael Bruce’s music is just as beautiful.”

The Arts Desk: “a triumphant hybrid” / “Shakespeare’s enduring tale of star-crossed lovers is especially pertinent in a pandemic. The fatal plot twist depends on failed communication during an outbreak of pestilence, and one of the most famous lines is Mercutio’s heartfelt, “A plague on both your houses” – clearly no idle curse. Written a couple of years after plague had closed theatres in 1593 (when Shakespeare turned to writing poetry) that undercurrent must have been all too real for the first audiences. It resonates still.”

“Simon Godwin, now Artistic Director of the Shakespeare Company in Washington DC, has an impressive list of credits as a stage director, including Antony and Cleopatra and Twelfth Night at the National, but this is his first film. He has acknowledged his debt to cinematographer Tim Sidell, while producer David Sabel was behind the launch of NT Live over a decade ago. They make a winning team.” 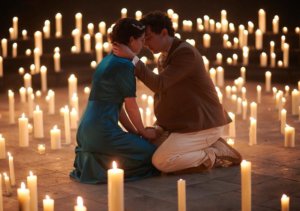