The Feature Documentary is set in the late 1970’s. Punk is exploding. The country is deeply divided over immigration. The National Front, a far-right and fascist political party, is gaining strength as politicians like Enoch Powell push a xenophobic agenda. Outraged by a racist speech from Eric Clapton, music photographer Red Saunders writes a letter to the music press, calling for rock to be a force against racism. Teaming up with like-minded creatives Roger Huddle, Kate Webb, Syd Shelton and Australian graphic designer Ruth Gregory, the team bands together to create Rock Against Racism (RAR) and a fanzine, Temporary Hoarding.

White Riot focuses on when Temporary Hoarding were speaking directly to the youth and reporting stories and issues that the mainstream British media ignored, giving a voice to the voiceless.

White Riot is showing at Cine Lumiere, Ritzy Picturehouse and Genesis Cinema with a limited number of ticket’s being available on a ‘first come first serve’ basis, so get yours now! 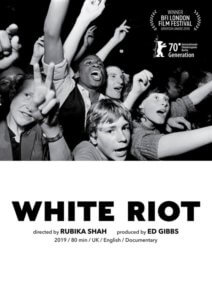 Susanne shot BIFA nominated and award winning feature My Feral Heart directed by Jane Gull, and for TV Enterprice S2 directed by Ella Jones. Documentary work includes Even When I Fall, nominated for the BIFA Discovery Award, and the BBC’s Where In The World, and short films include Hayley Alien directed by Hannah Arterton, The Honeymakers directed by Jeneffa Soldatic and Jane Gull’s Twitcher for which Susanne won Best Cinematography at the Global Impact Film Festival and Underwire Film Festival respectively.

Cinematographer Nicola Daley ACS talked to Screen Australia about getting a break in the industry. Nicola mentions the challenges she faced getting…

Shot by Cinematographer Susie Salavati, White Riot is hitting cinemas THIS WEEK. The Feature Documentary is set in the late 1970’s. Punk…