Cinematographer Ryan Kernaghan shot feature Boys From County Hell which is now available in cinemas across the UK and Ireland!

Directed by Chris Baugh, Boys From County Hell is based on a crew of hardy road workers, led by a bickering Father and Son. They must survive when they accidentally awaken an ancient vampire.

Empire Magazine gave the Feature 4/5 stars and said; “Following a cold open involving two OAPs whose cosy TV tea turns into a gruesome bloodbath – domesticity and devilry will share a space to chilling and comedic effect throughout – we backtrack to two months earlier. Lifelong pals Eugene (Jack Rowan) and William (Fra Fee) are stuck in a rut of day drinking and spooking gullible tourists while dreaming of escaping their hometown of Six Mile Hill, a sleepy Irish village shot in atmospheric wide angles and shadows by DP Ryan Kernaghan. When Eugene’s crotchety, stick-in-the-mud roadworker dad (Nigel O’Neill) agrees to help build a highway through their village, disturbing the cairn-guarded grave of ‘real Dracula’ Abhartach, tragedy — and a bull — tear Eugene and William apart. Bloodshed and banter follow as father, son, and a small band of reluctant road workers are forced to reckon with resident evil and their own inner struggles.” 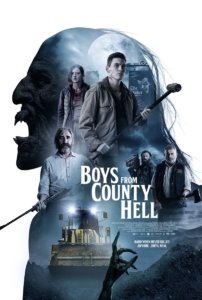 Ryan’s most recent feature, Boys From County Hell, directed by Chris Baugh, received its World Premiere at Tribeca Film Festival 2020. This follows his debut feature, the darkly comic revenge thriller Bad Day for the Cut which premiered at the Sundance Film Festival. Drama includes Ted Lasso S2 and The Bay S1 & S2 directed by, amongst others, Lee Haven Jones and Robert Quinn,.