Directed by Ninian Doff, Get Duked! (previously known as Boyz in the Wood) has been described as a “hip hop comedy” and revolves around 4 boys who set off to achieve their Duke of Edinburgh Awards but realise they are being mysteriously hunted while they are on their wilderness trek.

Get Duked! will be available to stream on Amazon Prime from 28th August 2020. 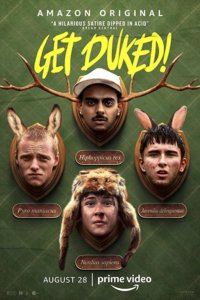 Patrick’s features include Rare Beasts directed by Billie Piper which premiered at the Venice Film Festival, and Boyz In The Wood directed by Ninian Doff which premiered at SXSW winning the ‘Midnighters’ Audience Award’, and also opened the Edinburgh Int’l Film Festival. Short films include Beast, directed by Leonora Lonsdale, and for television BAFTA winning Dreamland, scripted by Sharon Horgan and directed by MJ Delaney. He won Best Cinematography at the UK Music Video Awards for Miike Snow: Genghis Khan directed by Ninian Doff. Other directors include Noah Harris, Ryan Hopkinson, Bob Harlow and Ivana Bobic.

Cinematographer Nicola Daley ACS talked to Screen Australia about getting a break in the industry. Nicola mentions the challenges she faced getting…

Shot by Cinematographer Susie Salavati, White Riot is hitting cinemas THIS WEEK. The Feature Documentary is set in the late 1970’s. Punk…