Directed by Terence Davies, Benediction follows “legendary 20th Century war poet Siegfried Sassoon’s life-long quest for personal salvation through his experiences with family, war, his writing, and destructive relationship goes unresolved, never realising it can only come from within.”

The Guardian described the feature as “Terence Davies’ piercingly sad Siegfried Sassoon drama: Benediction proceeds in a series of movie tableaux with a stylised theatricality, a cinematic magic lantern show with conventionally acted scenes, archive first world war footage, grim clinical photographs, back-projections and superimpositions from which the figure of Siegfried Sassoon emerges: the hero who won the Military Cross for gallantry, but went on fiercely to oppose the war, wrote poetry about the hell of the trenches and befriended and inspired the young Wilfred Owen – yet after the war endured a long anticlimax of obscurity, disappointment and loneliness.”

The Independent wrote “Terence Davies’ tends to his 20th century tragedies with care” and said “there’s a clear sense of internal torture at work in Benediction, reflected in the calibrated harshness of Nicola Daley’s cinematography.”

The feature screened at the Toronto Film Festival, and is now showing at cinemas all across the UK! 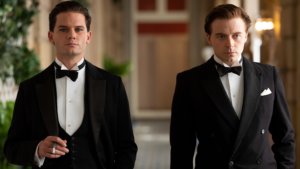