Amazon Prime Video has released a trailer for the third season of the action drama series Hanna, which features Hair & Makeup Design by BAFTA-nominated designer, Bethany Swan. This was Bethany’s next design job after the lauded I May Destroy You. 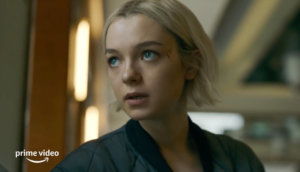 Season three of Hanna continues the journey of an extraordinary young woman, played by Esmé Creed-Miles, who was created by the sinister organisation, Utrax, and trained to be an assassin. Hanna (Creed-Miles) is now secretly trying to destroy Utrax from the inside and free herself from its grasp with the help of her previous nemesis, former-CIA agent Marissa Wiegler (Mireille Enos). Together, they have coerced high-ranking Utrax agent John Carmichael (Dermot Mulroney) into aiding their mission, but her fellow young assassins, Sandy (Áine Rose Daly) and Jules (Gianna Kiehl), and new foes are starting to suspect Hanna’s plot. As Hanna moves closer to her goal, she begins to uncover not only a world-changing agenda, but the true power behind Utrax that stands between her and freedom.

Hanna is written by David Farr (The Night Manager), who also serves as executive producer. The series is produced by NBCUniversal International Studios, a division of Universal Studio Group, Working Title Television and Amazon Studios.

All 6 episodes will be available on November 24 on Prime Video.

Bethany Swan is a BAFTA nominated Hair & Makeup Designer working in films, drama and commercials. Her most notable work was designing Michaela Coel’s lauded BBC / HBO drama, I May Destroy You. Her work on the show led her to being named a Screen International Star of Tomorrow and BAFTA Breakthrough. She’s received a nomination for an RTS Craft Award and a BAFTA Craft Award for the Hair & Makeup design on the drama.

The first look of Last Train to Christmas written and directed by Julian Kemp is here! Check out Michael Sheen’s hair transformation….

NEW TO THE ROSTER: JESS SUMMER

Wizzo & Co. are delighted to announce that Hair & Makeup Designer, Jess Summer, has joined the agency. Jess is an extremely…

Amazon Prime Video has released a trailer for the third season of the action drama series Hanna, which features Hair & Makeup Design…